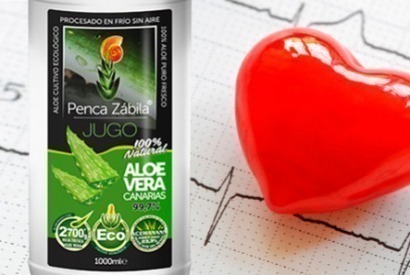 Reduces levels of LDL cholesterol and triglycerides by increasing HDL.

Cholesterol is a very important fat for the organism, since it is found in each and every one of its cells. This fatty substance is manufactured by the liver and used by the body in the construction of cell membranes, constitution of bile acids and production of hormones.

High levels of LDL cholesterol are related to cardiovascular problems, since if there is an excess of this fat in the blood, it accumulates in the walls of the arteries forming a plaque that narrows the vessel's lumen. This narrowness is known as atherosclerosis. The cholesterol known as HDL has an opposite action, that is to say it acts as a cleanser, since it liberates the walls of the vessels from the accumulation of the sclerous plaque

It has been observed that Aloe Vera has a very important role in lowering the levels of LDL cholesterol and TG triglycerides, since it can also significantly increase the good HDL cholesterol, due to plant sterols, organic germanium, chromium, acemannan, vitamins, amino acids and enzymes (Dixit and Joshi, 1983).

In another study (Vogler and Ernest, 1999). Nasiff et al. (1993) a controlled clinical trial was conducted in 60 patients with hyperlipidemia who had not previously responded to dietary interventions. Patients received 10 ml or 20 ml of Aloe Vera Juice or placebo daily for a period of 12 weeks. Blood lipid levels were measured before treatment and after four, eight and twelve weeks. Total cholesterol decreased by 15.4% and 15.5%, triglycerides by 25.2% and 31.9%, low density lipoprotein (LDL) by 18.9% and 18.2%, respectively in the groups that received aloe vera.