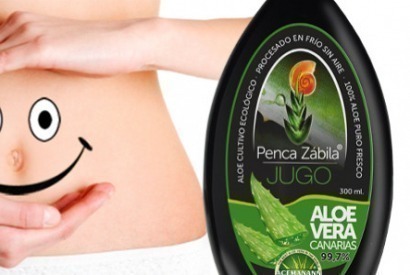 In gastrointestinal diseases such as gastric ulcer, Crohn's disease, gastritis, Irritable Bowel Syndrome and even infections due to bacteria, acute chronic lesions of the gastric mucosa develop where Aloe Vera or Zábila is effective as a treatment, according to numerous medical studies.

In a study Suvitayavat et al. (2004) evaluated the effect of Aloe Vera on gastric ulcer, treatment with aloe inhibited the production of gastric acid, stimulated pepsin and secretions. In another study for the treatment of ulcerative colitis, the aloe juice ingested for 4 weeks reduced the activity of the disease and the results showed that ulcerative colitis decreased significantly (Langmead et al., 2004a).
The effect of aloe vera on acute lesions of the gastric mucosa was studied, presenting a strong activity as a gastro-protective agent against the lesions induced in the mucosa; It was concluded that aloe juice protects the gastric mucosa from harmful agents and that it is effective to use aloe vera in the treatment of ulcer (Yusuf et al., 2004).

Langmead et al. (2004b) evaluated the effects of Aloe vera associated with inflammatory bowel disease, the authors concluded that the anti-inflammatory activity of aloe vera has a therapeutic effect.

Davis et al. (2006) conducted human studies demonstrating that aloe is beneficial against irritable bowel syndrome (IBS) and in ulcerative colitis and benefits patients with predominant diarrhea or constipation in IBS.

Pogribna et al. (2008) investigated the effect of aloe or aloe on bacterial cultures of the human intestine. The results indicated that Aloe vera possesses bacteriogenic activity against microorganisms concluding that the consumption of an aloe vera supplement improves the human intestinal microflora.